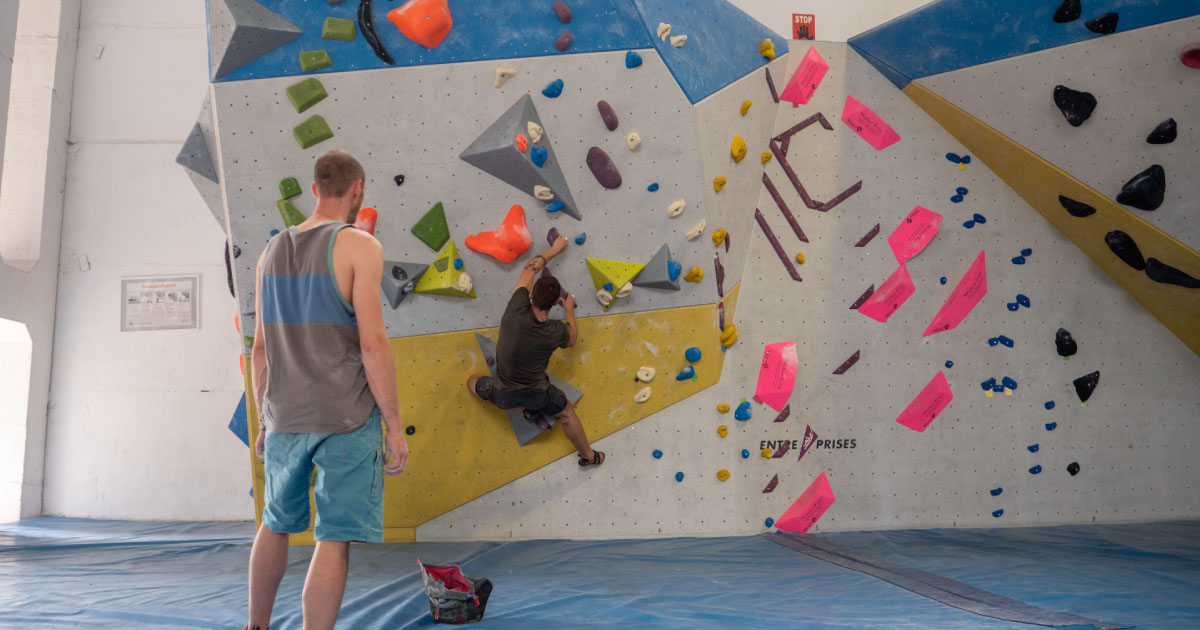 It’s rarely boring in climbing gyms. Once a route has been completed, the next challenge is waiting right next to it. However: you don’t always want to tackle a new, tricky problem. If you want to add variety to your session, climbing games and exercises are a great way to have fun without hard projects. And you benefit twice. On one hand, you bring a breath of fresh air into your everyday climbing life and on the other hand, many of these games are worth more than gold when it comes to refining your climbing skills. Technique, strength, creativity and reading routes are all about to get a whole lot more fun.

Silent Feet: sneaking up the wall

If you want to be able to climb well, you need good foot technique. That in turn means being able to place your feet precisely. This is exactly what Silent Feet, a classic climbing game, aims for. The idea is to climb a route in such a way that you make no noise. Many beginners have problems with this. Because your body weight is still resting on the foot that is to be set again, you pull it on with momentum. Often it snaps into place somewhere above the step in the wall and slips into position. It’s neither quiet nor precise.

The solution is simple: if you bring your body into a position in which you completely relieve the pressure on the foot, you can place it on the next step without swinging and thus quietly. Playing Silent Feet helps you to learn the correct work with the center of gravity and improves your precision when climbing.

If you want to turn it into a competition, find a handful of easy and medium-difficulty routes with friends and climb them one after the other. There is a point for every sound. Whoever has the fewest points at the end wins.

Stop and Go: technique and strength in one

The position of your body plays an important role in the stop and go exercise. It trains your fingers, the muscles and your body tension.

For stop and go, boulders on straight or slightly overhanging walls are best. They can be hard routes, but do not push yourself to your physical limits. You then climb as usual – with one difference: when you move on, you don’t grab the next hold immediately, instead you stop beforehand and let your hand hover over the hold for a moment.

That sounds easier than it actually is. Because you stop at the most difficult point in the movement, even relatively easy holds become tough. You force yourself to find a stable body position. Therefore, stop and go climbing can improve both technique and strength. The exercise is particularly suitable for you if your weaknesses are body tension and blocking force.

Being able to hold a static position for a moment will always help you in your climbing life. However, being able to climb dynamically is equally important. In this way, particularly long moves can often be solved with much less effort. If this is your struggle, a game of boulder golf is for you.

Grab one or more friends and choose a handful of boulders that you can safely climb. Every boulder is a hole on your golf course. As with real golf, it is now a matter of finishing with as few strokes as possible. Your score is the number is the number of holds you used to do top the route. If someone jumped from the start directly to the top hold, the climber would have a hole in one. If you needs intermediate holds, each hold used increases your score by one. It gets a little more demanding when you count moves instead of holds.

For each boulder, players only have one attempt. Anyone who does not manage to climb the boulder in the first attempt receives the score of the player who took the most hits and receives an additional penalty point. If the weakest successful player used three holds, the failed player’s score will be four. At the end all points are added up. The winner is the climber with the lowest overall score.

Good climbers don’t just jump on a route. They take the time to look closely and think about possible solutions for each individual move before starting. In order for this mental preparation to bear fruit, you need to be able to remember the beta.

Packing your suitcase is a memory game with which you can work on this skill together with friends. The idea behind it is simple: together you create your own boulder that gets longer and longer. The difficulty is then no longer just climbing the problem, but also memorizing the moves.

First you determine the order in which you climb. Then the first player defines the starting hold and makes the first move. The second player repeats this move and adds a move. If there are other players, they must now climb every move before they can add their own. Once everyone has had a turn, the first climber climbs the whole route and adds another move to the end.

In the simplest variant, you only define holds. If you want more of a challenge, you can also define foot holds. You can also specify that players who skip a previously defined hold can add two moves in their round. This means that older parts of the route also change during a round, which makes it even more difficult. If you misclimb three times or fail to make moves, you’re out. The last remaining player wins. 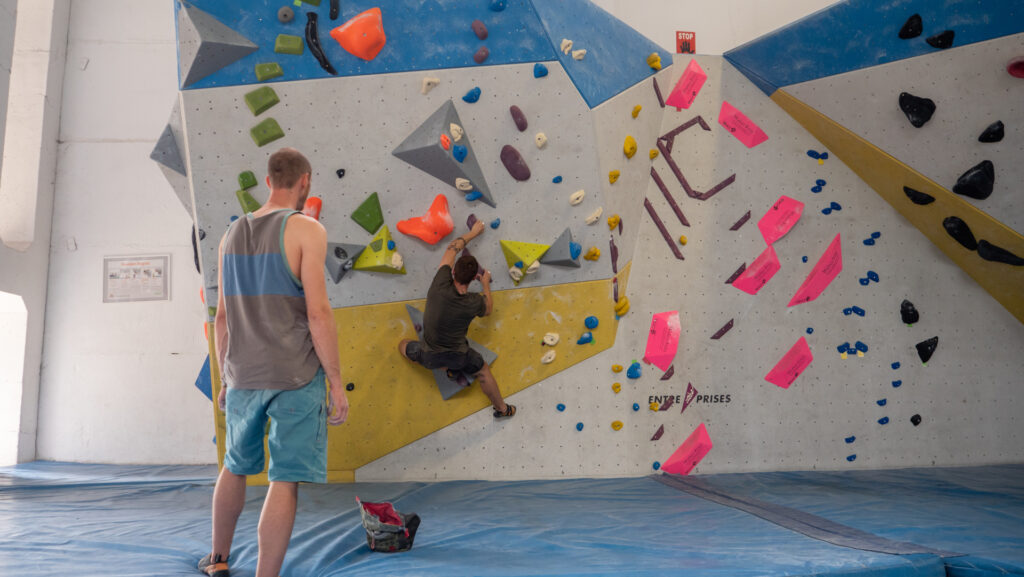 Beta breaker: Isn’t there another way?

When it comes to reading routes, memory is only half the battle. In order to read a route by looking at it, you also need an understanding of movement and a pinch of creativity. This can also be trained in a playful way.

The exercise of choice in this case is beta breaking. The aim is to climb a boulder in all possible ways. Once you’ve climbed a route one way, you’re not satisfied with just that – instead, you try to find an alternative combinations alone or with friends.

Often these alternative solutions won’t be easier, and sometimes there may not be a second feasible beta either. Nevertheless, this exercise is useful in two ways: on one hand, you are challenged to constantly develop new ideas for movement. On the other hand, when you try it out, you get a better understanding of which moves work well when and when they tend not to. The wealth of experience built up in this way helps you to find good solutions for new routes more quickly – even if you have already left the mat and have to rethink spontaneously because your original plan does not work.

Shopping cart
Product categories
We use cookies on our website to give you the most relevant experience by remembering your preferences and repeat visits. By clicking “Accept”, you consent to the use of ALL the cookies. However you may visit Cookie Settings to provide a controlled consent.
Cookie settingsAccept
Cookie settings